A collection of hackers left their calling cards here over the last week or so. I had been hacked, sometimes for the fun of it, other times with love.

Recently I received a notification warning of a WordPress vulnerability in version 4.7.1 and was advised to update to a recently patched edition. Sadly I thought I had done this, but apparently not. The hackers were quick to take advantage. 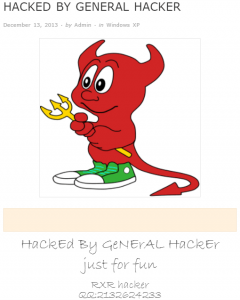 The result was subsequently finding this site had been hacked ‘just for fun’. The following image is what it looked like. Thank you GeNErAL HaCkEr and friends.

Upon looking at the content that had changed, I found that it had been hacked several times over within a period of a few days, sometimes with love. It was stacks on hacks.

I had to laugh because the system had recorded each hack iteration and there were a few revisions for hackers of various names. It seems they were writing over one another’s hacks in a competition for screen time, much like graffiti artist might paint over the top of one another’s artwork and tags so their work is most visible to passers by.

Below is the hack timeline and note the repeat contenders. I’ve seen less sniping on Ebay.

Thanks to all who participated in this impromptu competition. I’m not sure who won, whether it was Dr.SiLnT HilL for the initial hack or GeNErAL HaCkEr for persistence and being last on show when I found it. Either way, it seems hackers suffer from problem keyboards that produce varying letter cases. Either that or they have twitchy caps lock fingers.

If you have had similar visitors running amok in your web pages and would like assistance to clean up the mess and lessen the chance of return visits, feel free submit an assistance request on the Contact page.