Recently I had a recurring problem whereby some files on the usb drive attached to the router would go missing. They still existed on the drive, but were hidden. Accessing the parent folder, it would be indicated that there were zero files within the folder.

When I tried to copy the files into that folder again, Widows decided that files were indeed being replaced and asked if they should be overwritten. Furthermore, if missing files were in a missing sub-folder and I entered that sub-folder as part of the Windows Explorer path, those files would then become visible, so it would seem they were being hidden by the missing sub-folder.

Rebooting the router would fix this problem on some occasions but not on others. It was driving me crazy.

I tried backing up the contents of this drive and reformatting it with the router’s (NTFS) format option. Copying the files back again, I found I had the same problem. I then repeated this process, this time using Windows 7 to format the drive. This didn’t make any difference.

I tested further by attaching that drive directly to my pc. Once I did this, all files became visible. Comparing the attributes for the missing files with those that were always visible, I noticed that the missing ones seemed to have an attribute of ‘n’ where as the non-problematic files had an attribute of ‘a’. There was some kind of permission problem happening.

Searching the Ciscso forums, I found other people that were having the same problem, but no real solutions given.

Here is what solved the problem for me: 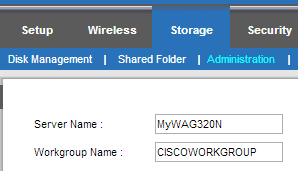 Within the router configuration, go to Storage / Administration and change the Workgroup Name to something unique. Mine was set to MSHOME, which is the same as my existing pc network workgroup name. I think I had changed it to this under the false impression that it needed to match the existing network workgroup name. It was here that my problems would have started occurring, but I had forgotten about the change I had made.

When I changed mine to CiscoWorkgroup, rebooted the router and the pc,  finally the files were behaving as they should.

I hope this has been a help to someone out there who has been having the same problem.

Further to this, files subsequently suddenly went missing after many months.

I found this was caused by errors on the network usb drive from not safely removing the drive before switching the router off.

Attaching the usb drive via SATA to a Windows PC allowed it to detect and fix errors on the drive at start up. Reconnecting the drive to the router restored correct function.